James Taylor
Born in Wales, James began to study the piano at the age of six and within a year had joined Newport Cathedral Choir as a chorister. He toured as a principal cast member with Music Theatre Wales, performed at the Enthronement of the Archbishop of Canterbury, and was awarded a Choral Scholarship to Rougemont School.
James has a Dip. ABRSM in Musical Performance, a First Class Honours in Music & Sound Recording (BMus Tonmeister) from the University of Surrey and won the Croser-Hughes Chamber Music prize and was awarded several performance scholarships.  James completed the postgraduate diploma in Musical Direction & Vocal Coaching at LAMDA (London Academy of Music and Dramatic Art) in July 2014. During this time at LAMDA, James studied with some of the best theatre tutors in the world, in all disciplines including acting, movement and improvisation, as well as conducting (with Stuart Morley and Jim Henson), composition & arrangement (with Anthony Ingle), and vocal technique (with Rob Archibald). As part of the course, James assisted various professional musical directors, as well as MD’ing several shows himself, culminating in a production of “I Love You Because”, directed by Hannah Chissick.
Since graduating from LAMDA, James has worked on a diverse range of projects across theatre, TV, radio and live music. Most recently, James was pianist for ITV’s production of “The Sound of Music Live”, and performed with Lance Ellington live on BBC Radio.  Other work includes musical direction & vocal coaching at numerous musical theatre schools (including LAMDA, The Urdang Academy, Associated Studios, and City Academy) and audition pianist for David Grindrod Associates, The Really Useful Group and Debbie O’Brien Casting.

Andy Purves
Andy is a lighting designer working in theatre, circus and educational projects. He trained in sound and lighting engineering at the University of Derby and has an MA in lighting design and theatre-making from Central School of Speech and Drama.  Lighting design projects include: The Nutcracker and the Mouse King (The Unicorn); Othello (Frantic Assembly); Ragnarok (Eastern Angles); The Believers (Frantic Assembly, winner of a Knight of Illumination Award 2014); Cooped (Spymonkey); It's a Family Affair (Sherman, Cardiff); A Season in the Congo - parallel production (The Young Vic); The Boss of it All (New Perspectives); Happy Families (Cirque Bijou/Circus Space); The Arrival (Tamasha); Rock Pool (Inspector Sands); Gruesome Playground Injuries (The Gate); Cooped (Spymonkey); Beautiful Burnout (Frantic Assembly/National Theatre of Scotland); Mess (Caroline Horton); The Irish Giant (Cartoon de Salvo); Little Dogs (National Theatre Wales/Frantic Assembly); Lovesong (Frantic Assembly); Stockholm (Sydney Theatre Company/Frantic Assembly); Babel (Stan Won't Dance); The Erpingham Camp (Brighton Festival); Ida Barr and Office Party (Barbican); Frankenstein (Northampton Royal); Home Inverness (National Theatre of Scotland); Outre and Ren-Sa (Array).   He designs regularly for The National Centre for Circus Arts (formerly Circus Space), has toured extensively with Propeller, Frantic Assembly, The National Theatre of Scotland and Spymonkey, has worked for Brighton and Greenwich and Docklands Festivals and on La Clique and La Soiree at The Roundhouse and in the West End.  In 2013 Andy founded the ALD eco group - the environmental responsibility sub-group of the Association of Lighting Designers and he is committed to encouraging and promoting best, environmentally responsible practice in performance lighting design.   www.andypurves.com

Joshua LeClair
Joshua is a graduate of the Musical Theatre program at Sheridan College in Canada and holds his MA from the Royal Central School of Speech and Drama. Since graduating he has performed in international contexts in voiceovers, workshops and musicals. His first project with Relative Motion was Bartram and Hill’s The Theory of Relativity which was incidentally written for his graduating class at Sheridan. When not performing Joshua is a yoga teacher trainer and is actively developing his research and workshops on how to use yogic techniques to supplement stage performance. www.joshualeclair.ca

Rebecca Cuthbertson
Rebecca is a freelance voice and text coach who will be joining the voice department at National Theatre in 2017 as the Voice Assistant.  She has an MA in Voice Studies from the Central School of Speech and Drama, a Bachelor of Education and a BA Combined Hons in English Literature and Theatre Arts.  Coaching credits include the London production of the Shakespeare/Fletcher play 'Double Falsehood', the YPS production of Hamlet at the Royal Shakespeare Company,  John & Jen (Finborough Theatre), A Memory, A Monologue, A Rant and A Prayer (London Premier). Rebecca also currently teaches at the East 15 School of Acting and the Drama Studio London. 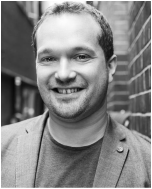