a fleeting moment in the woods with the hunted Edgar in Shakespeare’s masterpiece of madness, King Lear
experience this on a phone, tablet, in a VR headset or go full screen, wearing headphones
​​What is this?
​Edgar is being pursued in a manhunt, framed by his half-brother, accused of planning to murder their father, the Earl of Gloucester. Edgar’s an innocent man.

This is the moment in Shakespeare’s King Lear where Edgar decides to evade capture and inevitable execution by pretending to be mad and impoverished - he becomes Poor Tom.
​Why did we make it?
​VR gives us an opportunity to place an audience member right in the middle of a story. We wanted to see what William Shakespeare could tell us about narrative performance in virtual reality. This is one of three short pieces exploring different relationships between a single audience member (SAM) at the centre of the action and the characters and drama of a scene around them. In this piece, Edgar invites us into his thoughts and feelings in soliloquy - the audience becomes his conscience. In other pieces we explore audience as voyeur and audience as character.

How did we make it? 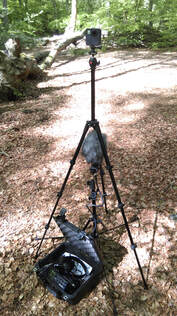 Why are we releasing it now?
We read an interesting article about the theatre industry in a time of lockdown – in the 17th century. Elizabethan London’s playhouses spent more time closed than open because of plague outbreaks in the city. It was during one of these enforced sabbaticals that Shakespeare was reputed to have written King Lear - in self-isolation.

In April 2020, at a time when Relative Motion is unable to bring performers and creators together to make new narrative experiences in virtual reality, we decided to dust off some material we captured in 2018 and, with the help of composer Tom Adams, give it a new lease of life. It’s our small contribution to keeping culture alive during quarantine.

This piece marks a new collaboration between Relative Motion and composer, Tom Adams.

“I come from a theatre background as composer and performer and was really interested in Relative Motion's approach in combining theatre, film and video game languages. VR is such a brilliant opportunity to allow the audience to feel truly invested in a piece.

My musical approach is to watch the piece again and again and improvise, experimenting with what instruments to use. My main aim is to not be self-conscious when composing – I just follow the story and let the process take care of itself. Being a performer myself, it is a lot like being on stage: trusting in the moment and breathing. Something will happen.

I have collected quite a large set of sound making things from guitars, ukulele, bass, harmonica and upright piano to stranger elements such as crisp packets, gongs, sticks and a brilliant sea drum that sounds, well... like the sea. Put all of these into effects pedals, change the pitch, speed it up and you've got something completely your own, bespoke to the piece. I have been watching a lot of Ozark recently and am inspired by the way the composers Danny Bensi and Saunder Jurriaans use tension in their music. I was on edge the whole time. I am also inspired by how organic sounds can be manipulated into something completely new and unrecognisable.”